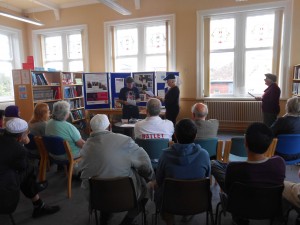 A report by a think tank saying Batley is in the least 10 places in the country when it comes to being integrated has been criticised as ‘bizarre and baseless’ by the local MP.

The Policy Exchange is said to have compared 160 places across England and Wales and placed Batley at 155 on the table. The think tank analysed the most recent Census data (2011), producing a list of the best and worst places in the country from the point of view of integration.

Batley & Spen MP, Jo Cox, has hit back questioning if anyone had even visited the town.

Mrs Cox said, “This Policy Exchange ‘press release’ lacks detail or reasoning. I’ve asked for more information about how they came to their conclusions but they’ve suddenly become rather tight-lipped.

“I have a strong suspicion that no one involved in this report has ever been to Batley. These are bizarre and baseless generalisations that show a dearth of understanding on every level.

“If they had visited our resilient town they could have met the Batley Poets and seen the great work that local white and Asian people are doing together. Or they could have visited local charities such as Royal Voluntary Service where volunteers from all backgrounds are supporting and helping each other every day.

“Integration is not about bricks and mortar, nor what streets people live on. No one has the power to dictate where people live nor should local councillors effectively be engaged in social engineering.

“Integration and community cohesion is a challenge but they come gradually, and through consent. It is very unhelpful to make baseless generalisations from a very narrow reading of five year old census data.

The Batley & Spen MP has asked for evidence to back up the research, but Policy Exchange have declined to offer anything further. They did provide an email address for the report’s author, but messages sent by the MP were returned undeliverable.