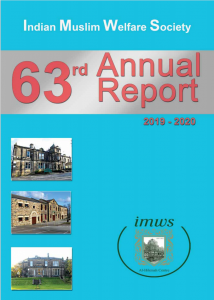 The Indian Muslim Welfare Society (IMWS) was established in 1957, with the express aim of supporting the well being and development of the local Muslim and wider community in and around Batley and the surrounding areas. IMWS is registered with the Charity Commission (charity number 1067746).

IMWS is based at the Al-Hikmah Centre, a 4 and a half acre site in Batley. The site includes a grade 2 listed building, sports and wedding halls, and conference facilities.

IMWS, being at the forefront in the promotion of diversity, is often asked it’s views on Faith, Racial and Cultural issues at both Local, Regional and National level.

It is managed by a Board of Trustees which consists of a Chair, Vice Chair and up to 10 other Office Bearers.

Appointment of trustees is governed by the constitution of the charity. The Board of Trustees adopts the title of ‘Executive Trustees’, and ordinarily consists of 12 elected members for a period of up to 3 years. The roles and responsibilities of the Executive Trustees will be governed by the current Charities Act and the Society’s ‘Roles and Responsibilities’ document. In addition, the Executive Committee may also appoint not more than 10 co-opted members for a term of up to 2 years, and Area Representatives of affiliated organisations. At regular meetings the Executive Committee agrees the broad strategy.

The following are affiliated organisations of IMWS:

The purposes of the charity are:

We use cookies on our website to give you the most relevant experience by remembering your preferences and repeat visits. By clicking “Accept All”, you consent to the use of ALL the cookies. However, you may visit "Cookie Settings" to provide a controlled consent.
Cookie SettingsAccept All
Manage consent