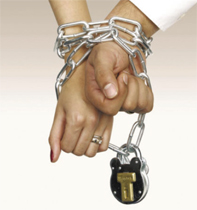 Forced marriages within some Muslim households are a problem that cannot be ignored, but the reason also has to be acknowledged. Forced marriages are not through religion but through culture, hence 66% of the 1485 reported cases in 2012 originating from the sub-continent. With the remaining 44% being scattered across 57 countries including the UK.

Arranged marriages, however, are a common practice amongst Muslims, though not exclusive to Muslims.

In India 90 per cent of the marriages are arranged and include marriages involving Hindus, Muslims and Christians.

In Islam the ultimate decisions in an arranged marriage remains with the prospective bride and groom, and no amount of force can be placed on them.

An Islamic arranged marriage can be instigated by either the boy or the girl and it is not the stereo typical version that many people imagine it to be.

Many may be surprised that the girl herself can express her interest in marrying a particular boy, and subsequently ask her family to make the relevant enquiries. What’s more, the girl herself is also able to ask a boy to marry her.

Shaykh Faisal Bodhania in his book ‘Hayaa: The Forgotten Branch of Imaan’ recalls an incident where a woman approached the Prophet Muhammad (pbuh) and asked if he would want to marry her. Shaykh Faisal writes:

‘If a woman was to have an interest in a man (for marriage), then there is no harm in expressing it. If she is shy to speak to her parents regarding it, then she should ask one of her relatives or close friends to mention it.’

Once a proposed match has surfaced, Islam encourages a meeting between the boy and girl where not only are they allowed to see each other but hold a conversation to gauge each others intellect and interests. When making a life long decision it is important that both parties recognise their compatibility.

If after the first meeting more questions arise then they are allowed to engage in another meeting, and so long as the marriage is a genuine possibility this can be repeated. If a decision still cannot be reached then, with the use of Istikharah (spiritual guidance), both parties should search their hearts for the answer.

Should the parents feel that the match is not a suitable one they do have the right to express their view. But if the bride and groom are adamant, the parents should then respect their decision.