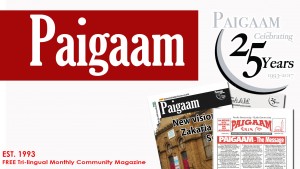 Another group is young people and with the change in the way information is accessed today, Paigaam wants more young people to come on board to help write the next chapter in the publication’s history.

Milestones are a favoured place to look back before planning the way ahead. As Paigaam passes the 25-years milestone, it sees those core values that began the publication still there whilst witnessing the change within the community over a quarter of a century.

The very first front page boasted of being ‘the wish of this community’ and ‘Paigaam is for the community, from the community’ delivering a message representing the views of the south Asian population of North Kirklees.

Looking back to the early 1990s, when Paigaam began, it was a time when the south Asian community had become established. The height of racism in the 1970s and 80s had reduced though not totally vanished, opportunities began to present themselves and this gave the community a chance to explore new possibilities.

Ceilings had were being broken in work places by minority communities and taboos also had to be challenged within communities themselves. One such taboo was girls going on to further education.

Although south Asian women looking towards empowerment, education and a career began their journey as early as in the 1970s, it was still a taboo subject in the local community.

But as the status quo began to be challenged the route for a girl leaving high school and going into a career became a little easier, with parents themselves having grown up and experienced the same education opportunities.

Today, south Asian women have broken those taboos and advanced into careers creating an empowering arena around them.

Women represent half of our community and need for their voices to be heard. This is why Paigaam would like to have more contribution in not just individual content but actual decision-making. The Paigaam meetings take place once a month where discussion includes articles for the next issue, review of the previous issue and correspondence as well as other matters. Members of the Paigaam Committee are also the first to see the new issue and feedback prior to going to print.

As well as women Paigaam also wants more young people to come onboard. New technology means information now travels at a tremendous speed. Whilst there are many positives to this, there is also an element of false information being shared. There is a need for a reliable trustworthy voice to steer users to facts, not fiction, and this has been a key role already played by Paigaam in print.

So, if you’d like to know more or join Paigaam and be part of shaping its future just drop us an email at paigaam@imws.org.uk and we’ll send you more details.

You do not need to be a member of IMWS nor have an IMWS member in the family. This opportunity is open to all adults.

This website uses cookies to improve your experience while you navigate through the website. Out of these, the cookies that are categorized as necessary are stored on your browser as they are essential for the working of basic functionalities of the website. We also use third-party cookies that help us analyze and understand how you use this website. These cookies will be stored in your browser only with your consent. You also have the option to opt-out of these cookies. But opting out of some of these cookies may affect your browsing experience.
Necessary Always Enabled

Any cookies that may not be particularly necessary for the website to function and is used specifically to collect user personal data via analytics, ads, other embedded contents are termed as non-necessary cookies. It is mandatory to procure user consent prior to running these cookies on your website.