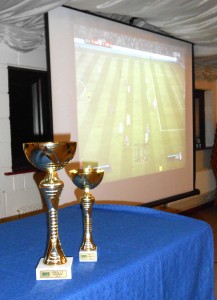 THE STAGE was set with two PS4 games consoles projecting the Camp Nou on elevated screen backdrops in wait of competitors challenging to become the IMWS Fifa 17 Champion.

The competition, organised by the IMWS Youth sub-committee with prizes sponsored by Frankies Burgers, saw each of the 19 competitors play three group games. Winners and runner-ups from the group stage progressed to the knockout part of the tournament, before a tight final brought out the best of gaming skills.

During the Sunday afternoon at the Al-Hikmah Centre last month, the boys aged 11 to 19 had an opportunity to also partake in the activities often used by the IMWS YouthClub, which meets up every Saturday at 5.30pm. These included table tennis, pool, table top football and an Xbox and became a fun distraction whilst waiting for their next game.

Back to the action and 16 year old Isma’eel Ahmed made it through to play 14 year-old Muhammed Hasan Mayet in the first semi-final. In the second semi, 16 year-old Mohammed Dadhiwala was up against 17year-old Huzaifah Dadhiwala.

Though the matches had their own elements of excitement,Isma’eel Ahmed and Mohammed Dadhiwala made their way through to the final.

After a very well mannered tournament from all the competitors, it came down to a closely contested final. Both Isma’eel and Mohammed had their sights on the trophy and went through the standard five-minute plus extra time on a stalemate of one goal each. This inevitably meant a tense and exciting penalty shoot out would decide the victor. After netting his penalty Isma’eel Ahmed became the IMWS Fifa 17 Champion. As well as a glittering trophy the winner also received a voucher from trophy sponsors Frankies Burgers of Batley.

Chair of the Youth Committee, Jaffar Daji, said, “Although competitive the atmosphere throughout the day was relaxed and the games were played with courtesy and sportsmanship.

“It was really wonderful to see the youths taking part in this year’s FIFA 17 gaming tournament, and thank you to all the volunteers who helped make the day a success and also to the participants who attended from across our community.”

The tournament began three years ago and has become a regular slot in the Youth sub-committee’s calendar.

This website uses cookies to improve your experience while you navigate through the website. Out of these, the cookies that are categorized as necessary are stored on your browser as they are essential for the working of basic functionalities of the website. We also use third-party cookies that help us analyze and understand how you use this website. These cookies will be stored in your browser only with your consent. You also have the option to opt-out of these cookies. But opting out of some of these cookies may affect your browsing experience.
Necessary Always Enabled

Any cookies that may not be particularly necessary for the website to function and is used specifically to collect user personal data via analytics, ads, other embedded contents are termed as non-necessary cookies. It is mandatory to procure user consent prior to running these cookies on your website.