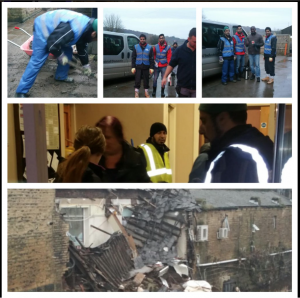 Hundreds of Muslims across a number of charities and volunteer groups from Batley, Dewsbury and further a field raced to help victims caught up in the recent floods.

It all started with Cumbria following the devastation left behind by storm Desmond.

The first to reach was Blackburn based charity Al-Imdaad Foundation UK. The charity is experienced in dealing with natural disasters around the world and turned their hands to help victims of the flooding much closer to home.

On seeing the destruction left by the floods a call for help from the charity and circulating images inspired more people to help including local charities and volunteer groups One Nation, Forgotten Friends and Kumon Y’all.

Around 150 local Muslims were there to help on the first Saturday following the floods.

The help and assistance was gladly received by locals, who shared their appreciation via social media.

Whilst many spent the holiday weekends at home, there were those who headed off to lend a hand.

With the new floods came new volunteers including a group of children from Madressa Taleemuddin and 121 Tuition. They headed up to York and Cumbria.

@DaintyBallerina from York tweeted: “Cheeriest thing today was seeing little boys as young as eight from the mosque lugging sandbags about and offering to make sandwiches.”

IMWS also opened the Al-Hikmah Centre to victims in need of a warm and dry place to stay and launched an appeal to collect donations for the flood victims.

The now experienced Cumbria clear up teams were joined by new groups like Hands Together from Batley as well as others, who gave up their holidays to help those in need.

Oowaise Ekleria from Forgotten Friends told us whilst he and his fellow volunteers had only just arrived and were unloading their car, a local couple pulled up, rolled down their window and said, “Just wanted to say thank you for coming here and helping us, we really appreciate it.”

Arshad Patel from One Nation told us, “Helping at the Cumbria floods was an amazing experience. A few of the homes where we helped out, the garden and driveways were full of mud. With around 20 volunteers from our team and working alongside the army, we managed to clean 5 homes in 1 day, which would have taken the home owners at least a fortnight to clean.

“We met one homeowner who was really overwhelmed with the help he received from the team and was in tears when he was telling us about the situation. He says it will take 6 months to get his house back to the way it was.”

The kindness extended beyond expectation with Masjids in and around the flood affected areas opening their doors and giving victims a warm place to stay.