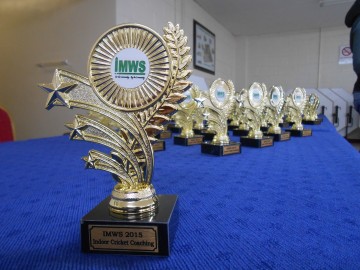 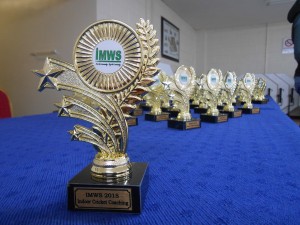 The annual Indoor Cricket Coaching course celebrated another successful year in developing young talent who we all hope will one day progress to represent our county and country at the highest level.

Run by IMWS in partnership with Kirklees Council the ECB accredited course this year was extended to 17 weeks and began two months earlier than usual, starting in December 2014. Not only was the course extended but so were the age groups, with children up to 16 years-old being able to take part and benefit from the professional coaching.

Two sessions with one for boys aged 8 – 12 years and the second for  boys13 – 16 year-olds also extended the time and commitment from the coaches who have, since its beginning some eight years ago, shown outstanding dedication.

The IMWS Chair, Mohamed Mulla, said, “This year’s cricket coaching programme has been excellent and it attracted more than fifty children throughout it.  It has been getting more popular every year. We genuinely hope that one of these kids will play for Yorkshire and England.” He further added “I must respect the parents who sacrificed their day for fifteen weeks to bring the children to the coaching programme.”

“As part of our commitment to the voluntary Sector we are happy to be associated with the cricket project through our contract with IMWS.

“It’s great to see children and young people able to access quality coaching which will allow them to exit into local clubs.”

Since its beginning seven years ago around 500 youngsters have revelled at the opportunity, and the course remains as popular as ever.

The were 12 gold, 19 silver and 10 bronze certificates achieved this year.