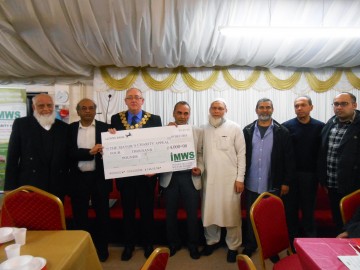 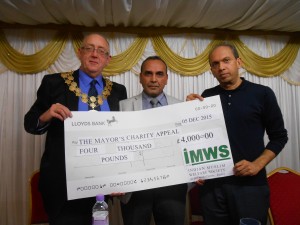 IMWS hosted a charity dinner last Saturday evening in aid of the Mayor’s appeal, which this year is raising funds for national charity Diabetes UK.

Mayor of Kirklees, Cllr Paul Kane, was amongst the dignitaries at the Al-Hikmah Centre in an event that marked the community organisation’s support with the Mayor’s appeal dating back to 1972.

Diabetes affects an estimated 29,000 people in Kirklees with type 2 being particularly high amongst the local south Asian community.

During the evening Krishna Sarda from Diabetes UK explained the causes of diabetes and how to manage it through a good healthy diet. Krishna spoke of the importance of portion sizes and south Asian cuisine.

Chair of IMWS Mohamed Mulla said, “IMWS has a strong history of helping local causes including the Mayor’s appeal which dates back to our early years. But this years appeal has a very strong connection with our community.

“Within our community diabetes has been rampant and it’s important to highlight that in many cases it can be prevented.

“I hope the appeal we launched and the charity dinner will go towards building a greater awareness amongst the community.” 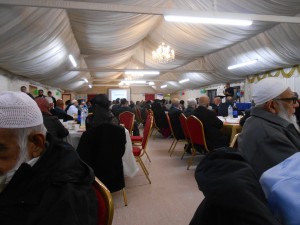 The Mayor of Kirklees Cllr Paul Kane said, “What a wonderful event and well organised, it was nice to see so many people there and to raise such an amount. My speech may have brought home to the attendees the seriousness of Diabetes suffering, although the funds raised were fantastic the awareness is incalculable and people need to know that type 2 Diabetes is preventable in 95% of cases.

“I want to thank IMWS for hosting the event and making it a success.”

It’s not the first time IMWS have teamed up with a Mayor’s Appeal. The Society has a long history dating back to 1972 when with the help of the local Muslim community £125 was raised and donated to the then Batley Mayor’s Appeal.

This time round IMWS launched an appeal through the affiliated masjids in Batley and a cheque of £4000 raised through the appeal was presented to the Mayor on the night.

Additional donations were also taken during the evening.

As well as enjoying the five-course meal guests enjoyed speeches by the Mayor, the IMWS Chair and Krishna and were entertained to an evening of Gujarati Poetry with guest poets from Yorkshire and Lancashire taking part.

Diabetes UK is a leading charity and provides information, help and peer support so people with diabetes can manage their condition effectively. It is also one of the largest funders of diabetes research in the UK.