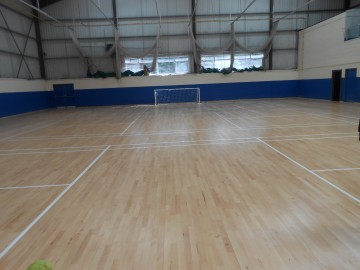 Last month IMWS launched a new sporting initiative, Walking Football, where the rules are very similar to five-a-side football, but with one exception – you can’t run.

This latest craze started in 2011 when it was first played by Chesterfield FC Community Trust. Its popularity has snowballed since with nearly 900 walking football clubs across England, prompting an official rule book from the FA which was launched in late February.

Aimed at the over 50s, though anyone can play, the aim was to engage older people into playing football as they used to in their younger days. Aside from the health benefits, it is hoped walking football will also counter social isolationism and loneliness as people get together to play a game.

The first session was delivered by Damian Ives, the Football Development Officer for Kirklees Active Leisure, who introduced the leisurely paced sport and its rules. Running and kicking the ball over 6 feet incurs a free kick, but other than that it’s just like you’re playing five-a-side.

Lead on the project and a participant, Mark Griffin said, “it’s great exercise, really enjoyable and with a very friendly group”.

Walking football takes place on Thursdays at the Al-Hikmah sports hall. You don’t have to register or be over 50. Everyone is encouraged to come along.