IMWS Hustings and feedback from the candidates 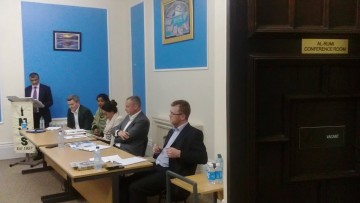 A Hustings event held for the upcoming local election had a good and diverse attendance engaging in debate over a variety of local issues. Organised by the Indian Muslim Welfare Society (IMWS), the 2-hour event became a landmark for the organisation who has previously held Hustings for general elections but held a local election Hustings for the first time.

All candidates form both Batley East and Batley West wards were invited to the event.

The floor asked what candidates would do regarding community cohesion and the panel were pushed beyond the usual ‘get together’ ideas.

A key issue was around the recent un-stunned Halal in schools debate, which many, including all the candidates, felt was instigated to divide the community. Many commented that it was targeted at Muslims.

Islamophobia and the rise of the far right was a matter of concern and an attendee questioned if austerity measures had played a role in the rise of Islamophobia.

New housing developments and the problems they cause the existing infrastructure was also raised. And candidates were asked a question around about being more eco-friendly.

But the general feeling in the room was one of representation. Local people want their town and their view to be represented and challenged the candidates to deliver on that.

Mohamed Laher, Chair of the Community Affairs committee, said, “Local issues are important to the community and IMWS gave the public an opportunity to air their views to potential councillors of what they want from their councillor.

“We need more of these types of events after the election so that the community remain informed if the elected councillors are meeting the pledges they made”.

The Hustings was volunteer led, promoted on open media platforms and open to all members of the public. The attendance was diverse in age, from teenagers to retired persons, diverse in ethnicity and race and diverse in political opinions.

IMWS have previously organised Hustings for general elections including in 2015 and 2017 when they held the only Hustings in the area.

After the Hustings we asked candidates too give us their feedback on the Hustings. We have included their replies in full below. 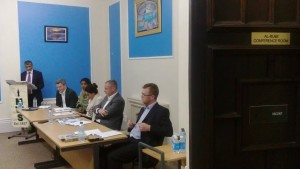 Just a quick note to thank you and all involved for organising and attending the event. It was great to hear from people living within the town and listen to their experiences and concerns.

I think local democracy like this really works and helps hold local officials to account. The format worked really well and I feel like the chair was very even handed with the amount of time he made available to each candidate.

It was good that Labour did decide to attend this event and it was interesting to hear their views opposed to just a load of national rhetoric. I do respect them for what they said especially around community cohesion.

However I do feel that in their closing statements really highlighted the problem which is they are solely focused on Kirklees and did not mention a single thing they would do in Batley. We are simply taken for granted and ignored whilst our money is wasted on ski slopes and museums.

They had a similar event on radio Leeds today but I feel our format worked a lot better.

Hustings event was overwhelmingly positive with good feedback received on the contributions I have made to the council and the community.

Having served on the council for Batley East over the last 18 months I have seen the impact of the 200million pound tory cuts and the difficulty in ensuring essential services are protected.

I have put community concerns and interests first ensuring the Council can harness the creativity and imagination of the people and communities who live and work in it. My focus will remain on safeguarding and child protection and developing work to bring our local communities together to overcome loneliness and social isolation.

I will continue to make sure the Council invest in preventative services now, to ensure that we can cope with future pressures.  We are going through a very difficult time with cuts, we cannot afford to jeopardise the wellbeing of future generations.

I also feel strongly that we need to be campaigning vigorously for better facilities for the ward’s youth who make up half the population of all the residents who live here. We can help get them away from thinking that the only path available to them is a life of crime.

Labour care, if elected again I will work hard alongside my Labour colleagues to ensure we mitigate these cuts and in particular protect children and the vulnerable adults.

It was a great event, different to the previous one, but challenging nonetheless. It was good to see so many people come out and listen to what Batley Conservatives have to say about what they hope to achieve in the town.

“I hope we put across our vision for the town well; we have a plan that should kick-start the changes needed and I hope those that attended could see the passion we both share.

It was a well-attended with a diverse audience who grilled us for nearly two hours.

I spoke to a number of the local residents, many of whom have been personally affected by the national government cuts. The cost of living has drastically increased, housing has become unaffordable, the two tier system has been introduced in schools and we are at risk of losing our beloved health service.

Our local council has been impacted the most by the current national government and their budget cuts, subsequently bringing our council to breaking point.

On the other hand affluent areas are thriving – Why?

Just like many of you as a candidate for the Labour Party of Batley West, I completely agree and echo that ‘enough is enough.’

Help me start the much needed change on Thursday 2nd of May and invest in a better and brighter future for Batley West.

I would like to say that the Hustings were

(a) An excellent idea (and something that is not necessarily offered in other towns/or wards – not Mirfield, to the best of my knowledge)

(b) Were managed in a fair and democratic way. As a relatively-new person to local politics I felt supported and encouraged by the chairperson and all those present at the hustings.

The residents and voters behaved impeccably – their questions were relevant, important and were debated within an atmosphere of fairness, with all parties willing to listen and let others be heard – politicians appearing on TV’s Question Time could learn a lot from the Batley electorate!