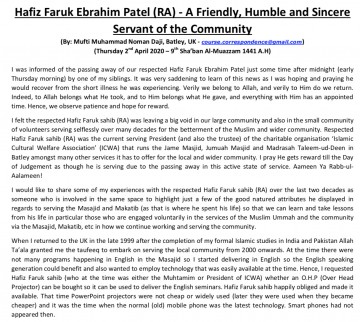 I was informed of the passing away of our respected Hafiz Faruk Ebrahim Patel just some time after midnight (early Thursday morning) by one of my siblings. It was very saddening to learn of this news as I was hoping and praying he would recover from the short illness he was experiencing. Verily we belong to Allah, and verily to Him do we return. Indeed, to Allah belongs what He took, and to Him belongs what He gave, and everything with Him has an appointed time. Hence, we observe patience and hope for reward.

I felt the respected Hafiz Faruk sahib (RA) was leaving a big void in our large community and also in the small community of volunteers serving selflessly over many decades for the betterment of the Muslim and wider community. Respected Hafiz Faruk sahib (RA) was the current serving President (and also the trustee) of the charitable organisation ‘Islamic Cultural Welfare Association’ (ICWA) that runs the Jame Masjid, Jumuah Masjid and Madrasah Taleem-ud-Deen in Batley amongst many other services it has to offer for the local and wider community. I pray He gets reward till the Day of Judgement as though he is serving due to the passing away in this active state of service. Aameen Ya Rabb-ul- Aalameen!

I would like to share some of my experiences with the respected Hafiz Faruk sahib (RA) over the last two decades as someone who is involved in the same space to highlight just a few of the good natured attributes he displayed in regards to serving the Masajid and Makatib (as that is where he spent his life) so that we can learn and take lessons from his life in particular those who are engaged voluntarily in the services of the Muslim Ummah and the community via the Masajid, Makatib, etc in how we continue working and serving the community.

When I returned to the UK in the late 1999 after the completion of my formal Islamic studies in India and Pakistan AllahTa’ala granted me the taufeeq to embark on serving the local community from 2000 onwards. At the time there were not many programs happening in English in the Masajid so I started delivering in English so the English speaking generation could benefit and also wanted to employ technology that was easily available at the time. Hence, I requested Hafiz Faruk sahib (who at the time was either the Muhtamim or President of ICWA) whether an O.H.P (Over Head Projector) can be bought so it can be used to deliver the English seminars. Hafiz Faruk sahib happily obliged and made it available. That time PowerPoint projectors were not cheap or widely used (later they were used when they became cheaper) and it was the time when the normal (old) mobile phone was the latest technology. Smart phones had not appeared then.

When I had the first batch of seminars in the first year (around the year 2000) I started intentionally with a seminar on Seerat of Prophet Muhammad صلى الله عليه وسلم. I had asked one of the local scholar respected Moulana Ismail Raja sahib (D.B) to deliver this Seerat seminar as I had wanted the local scholars to be involved with me and I had wanted to work alongside them cooperatively to be of service to the community and develop unity. At the opening of these series of seminars I requested Hafiz Faruk sahib to share a few words of encouragement too on behalf of ICWA so there was partnership between the local Muslim organisations and scholars. I asked Hafiz Faruk sahib that I would like to give the participants the pack of handouts of the seminars at the printing cost but he said there is no need to do that as it is a good cause and money well spent. Hence, that was done and the practice continued.

In between the first seminar and the last one, Hafiz Faruk sahib (RA) attended various other programs over the years like the Practical Hajj and Practical burial, etc. Hafiz Faruk sahib (RA) was always very supportive in letting me conduct programs at the Masjid. On a number of occasions he would come to the Madrasah hall to help me prepare for the program and get stuck in putting the benches to one side; moving the partitions and any clearing up that needed to be done. This was his humility and sincerity. This is something not others would know or he would share with.

Also, Hafiz Faruk sahib (RA) used to often say words of encouragement to me for the seminars I was holding at the Masjid. He once mentioned that I should show my written work to senior scholars so they can appreciate and acknowledge the work.

The last time Hafiz Faruk sahib attended one of the programs I was delivering was very recently (probably 10 days before he fell ill). It was the first monthly ‘Dars Seerat Al-Habeeb صلى الله عليه وسلم’ at Jame Masjid, Henry St, Batley which started on8th March 2020. Hafiz Faruk sahib was sitting right in front of me. Later on in the evening Hafiz Faruk sahib sent me the below appreciation message:

“Assalamu Alaikum Mufti saheb very good programme today jazakallah in sha Allah it will be beneficial for the community looking forward to next one.”

Alhamdulilah, JazakAllah for the feedback and encouragement. Insha Allah I pray too it is beneficial.”

I pray and hope Hafiz Faruk sahib (RA) will get the full reward for his firm intention to attend for the remaining Seerat lessons as he was looking forward to them. Intentions are very powerful so we should learn this habit of making intention to do good straight away so even if we cannot we will get rewarded. So every good act we do like perform Salah or attend a program, etc then make the intention straight away that you will attend the next prayer, next program, etc.

Just before Hafiz Faruk sahib was taken away ill He had recommended my name to a brother who was trying to establish some Muslim burial services and various other Muslim educational facilities in Ireland to sought my advice based on my practical burial seminars and other educational experiences. Actually, a program to go to Ireland was nearly complete before it had to be postponed due to the coronavirus pandemic. This will also be a form of reward for Hafiz Faruk sahib (RA). This shows his good nature too.

I pray to Allah Ta’ala that He grants the immediate and extended family of Hafiz Faruk sahib (RA) beautiful patience and the taufeeq that they continue with the selfless and sincere work he had been undertaking for decades in relation to the Masjid and Madrasah.

Hafiz Faruk sahib (RA) will definitely be missed by all of us in the community and further afield who knew him. I would request the readers to at least recite Surat Ikhlas three times and grant the reward to Hafiz Faruk sahib (RA). This is the least we can do and also to do this whenever you can.