Britain did not fight the Second World War, the British Empire did

As global conflict engulfed the world once again, Britain’s political will to hold onto India was as strong as ever. Despite the efforts of millions who were now involved in the struggle against the British of the preceding decades, neither Independence, nor Partition, were “done deals” come 1939.

The next two articles will trace the impact of WWII on Britain and India, and the forces that eventually led up to Partition in 1947. 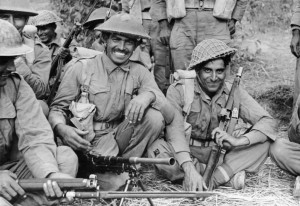 India gets dragged into the war

Whilst there was support for the war effort in WWI from Indian nationalists, including a fatwa from Deoband declaring its loyalty to the British, there was no such support in 1939.

Viceroy Linlithgow declared war on Germany and dragged India along without consulting Congress or any other Indian leader. Naturally, Congress was not happy and upon hearing the British were not prepared to make any concessions to Indian nationalist aspirations, Congress resigned from provincial government.

Congress resigning from office was supposed to hinder the British war effort in India by creating a gap between the colonial power, and the governed. Instead, the Muslim League, who supported the war, stepped into the void, a change of circumstance the British were willing to support and exploit to counter the influence of Congress. Moreover, with the Muslim majority province of Punjab crucial to soldier recruitment, Jinnah was in a favourable position with the British.

Jinnah felt confident enough, therefore, to pass the Lahore or “Pakistan” Resolution in 1940 at the annual All India Muslim League conference. This Resolution turned the “two-nation theory” – the idea that Muslims and Hindus constitute two separate nations – into official League policy. 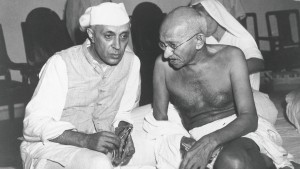 Having said that, as mentioned above, nothing at this point was certain and neither was Partition inevitable. It is crucial, therefore, not to read backwards into the 1940 Resolution through the nation-state of Pakistan that emerged 7 years later.

Curiously, though the Resolution called for “areas in which the Muslims are numerically in a majority… [to] be grouped to constitute ‘independent states”, there is no mention of “Pakistan”, or Partition. The Resolution and the forces that led up to Partition will be discussed in further detail next month.

Like in WWI, India was massively important in providing resources for the war, and Indian society felt the effects of it. 2.5 million soldiers volunteered for the army, serving in Burma, Italy, Ethiopia, north Africa and the Middle East. Out of Britain’s £3 billion war debt, £1.25 billion was owed to India.

Imports had collapsed, and the money supply in India was increased from Rs 3 billion in 1939 to Rs 22 billion in 1945, resulting in high inflation. This sent the price of food, which was already scare, shooting up.

Perhaps the worst and most horrifying impact of the war on India, was the extraction and diversion of food away from India to stockpile for “sturdy Tommy’s”, to quote Churchill. In a lesser known fact of WWII, his policy killed nearly 4 million Bengalis in 1943/44 in a deliberate famine. When British officials told Churchill of the situation, he chillingly replied, “If food is so scarce, why hasn’t Gandhi died yet?”

The contribution of the commonwealth, and India in particular, to the war effort was immense. To quote historian Yasmin Khan, “Britain did not fight the Second World War, the British empire did”.

Japan’s defeat of the British in south east Asia, particularly the fall of Singapore in 1942, made the British uneasy about the Indians potentially allying themselves with the Japanese to forcibly achieve Independence.

Churchill therefore sent a delegation, albeit reluctantly, to India to discuss the “the creation of a new Indian Union” with Dominion status. The Cripps Mission, so called as it was headed by Sir Stafford Cripps, was ultimately doomed to failure, in large part because Churchill wanted it to fail. Congress officials insisted on Indian representation in the wartime government of India, so Churchill ordered Cripps to not make any concessions on this point.

Churchill was a staunch imperialist and had no intention “to preside over the liquidation of the British Empire”. Indian Independence was not, therefore, on his “to do” list. The Cripps Mission was more a way to appease Indian nationalist sentiment than a serious commitment to a transfer of power.

With the failure of the Cripps Mission, Gandhi launched the Quit India Movement in August 1942. Though Gandhi, Nehru and other major Congress leaders were jailed as soon as the movement was launched, depriving it of overall leadership, inspired by Gandhi’s “do or die” speech, this mass movement became the largest threat to British rule since the 1857 Mutiny/Uprising.

However, unlike Gandhi’s other campaigns (Non cooperation and Civil Disobedience), Quit India was not a disciplined movement of civil disobedience, and neither was it non violent. The British responded ruthlessly and crushed the movement in just six weeks. Congress leaders were kept imprisoned until the end of the war; Quit India had failed.

The experience of war, however, changed everything. Britain was financially exhausted, massively in debt to India, and had a new Labour government headed by Clement Atlee who was more sympathetic to the Indians.

Independence felt like a real possibility for the first time. Moreover, it felt imminent.